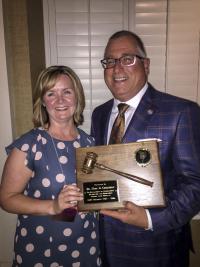 On July 1, ASEV confirmed Nichola Hall of Scott Laboratories as the 2016-2017 Board president. She succeeds Mark Greenspan of Advanced Viticulture, Inc. to lead ASEV’s 11-member board.

Nichola currently serves as a technical consultant for all areas of enology with a particular focus on fermentation management, microbial nutrition, wine microbiology and analysis, and winery hygiene at Scott Laboratories. She’s been an ASEV member since 2003 and has served on numerous committees, including the Best Paper Awards Committee, Early Career Members Committee, Membership Committee, Exhibitor Advisory Committee, Nominating Committee and Best Student Paper Award Committee. She’s been a presenter and moderator at the National Conference and an invited speaker at national and international meetings. Nichola also serves on the American Vineyard Foundation Grant Management Committee and is a published author in international and trade publications.