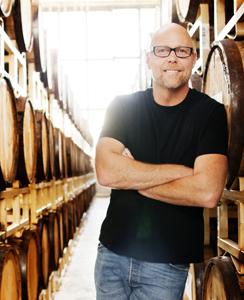 SACRAMENTO, CA, October 25, 2018 – St. George Spirits’ Master Distiller Lance Winters has dedicated himself to the art and craft of distillation and according to Esquire Magazine, is known for his “penchant for gleefully shunning the spirits world’s conventions.” The James Beard Foundation finalist will be presenting the keynote address at the 25th Unified Wine & Grape Symposium’s luncheon on Tuesday, January 29, 2019, at the Sheraton Grand Hotel in Sacramento.

Winters worked as a nuclear engineer in the U.S. Navy and a brewer for five years until he realized that brewing beer was halfway to distilling whiskey. Armed with a bottle of homemade whiskey as his resume, Winters approached St. George Spirits in Alameda, California in 1996 and has been with the distillery ever since. He has been the creative force behind St. George’s expanding portfolio and instrumental to its growth from a dedicated eau de vie distillery into one of the most prolific and innovative craft distilleries in the nation. Under Winters, St. George has launched many of the iconic spirits that the distillery is best known for today. His work has been recognized by the James Beard Foundation in 2016 and 2017 as a semifinalist and a finalist in 2018 for the category of Outstanding Wine, Beer or Spirits Professional.

“The distilled beverage sector is heavily steeped in tradition, even more than in our own industry, and sometimes, breaking with tradition can lead to successes. That’s one of the reasons the Unified’s Managing Committee chose Lance Winters to deliver this year’s address,” said Tom Collins, Unified Wine & Grape Program Development Committee chair.  “Lance’s dedication to quality sourcing and the distillation process, as well as his focus on understanding how aromas and flavors affect the products they produce has won them numerous accolades. Lance has shown that he’s not afraid to make a better version of whatever they’re working on. Those attending the luncheon will hear a unique perspective on distillation and his enthusiasm for the creativity he’s known for.”

In its 25th year, the Unified Symposium will again take place at the Sacramento Convention Center, located in downtown Sacramento, January 29-31.  Winters will keynote at the traditionally sold-out opening luncheon on Tuesday afternoon.

“Over the four decades since Jorg Rupf kicked off the craft distilling revolution, there’s been a lot of talk about how to be a craft distiller but not nearly enough about why,” said Lance Winters. “I want to spend some time talking about the role of creativity in distillation, the challenges it presents and why it’s vital to the survival of the category.”

Built with the joint input of growers, vintners and allied industry members, the Unified Symposium serves as a clearinghouse of information important to wine and grape industry professionals.  The Unified Symposium also hosts the industry’s largest trade show of its kind, with over 650 vendors displaying their products and services.

For additional information, go to www.unifiedsymposium.org.