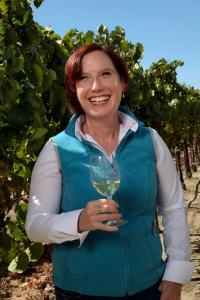 Davis, Calif., July 8, 2019… Kristen Barnhisel, winemaker for white wines at J. Lohr Vineyards & Wines, has been named 2019-2020 president of the American Society for Enology and Viticulture (ASEV). She succeeds John Thorngate who was vice president of operations technical services at Constellation Brands. In her new role, Barnhisel will lead ASEV’s 12-member board.

“I am pleased to serve with leaders in viticulture and enology as president of the ASEV board. My goals are to continue to elevate ASEV as the leading organization promoting research and technical advances in enology and viticulture. I look forward to guiding the exchange of technical information at our conferences to improve grape-growing and winemaking quality and production, as well as mentoring the next generation,” says Barnhisel.

The daughter of a microbiologist mother, who worked for Simi Winery, and a father who was a home winemaker, Barnhisel has over two decades of viticulture and winemaking experience on three continents—Italy, South Africa and the United States. After earning her master’s degree in enology from UC Davis, Barnhisel worked at Columbia Crest in Washington. After two years, she moved back to California to hold positions as assistant winemaker at Jordan Vineyard & Winery and at Belvedere Winery, and later at Handley Cellars, where she was co-winemaker with founder Milla Handley. She then took a position as the quality control manager with Inglenook, where she oversaw quality control for Rubicon, Inglenook’s flagship Cabernet Sauvignon, as well as the winery’s top white wine.

Barnhisel joined J. Lohr Vineyards & Wines as winemaker, white wines in 2015, where she has earned a reputation for her commitment to research and experimentation, and for the exceptional quality of her wines. She has been an ASEV member since 2005 and has been an active participant with ASEV since 2012, serving as chair for the scholarship and best student presentation committees, member of the membership committee, industry seminars organizing committee, and co-organizer for the ASEV Annual Meeting Fun Run (2001 -2006).  She’s currently a member of the American Vineyard Foundation Enology Proposal Review Committee and Women for WineSense. She also served as a member of the Napa Valley Wine Technical Group and Sonoma County Wine Technical Group. She has served as a moderator for the Pinot Noir session at the 2012 Unified Wine & Grape Symposium and presented her research at a smoke taint seminar at the University of California, Davis in 2009.

Formed in 1950 as a professional society dedicated to the interests of enologists, viticulturists and others in the fields of wine and grape research and production, ASEV’s membership of approximately 2,000 includes professionals from wineries, vineyards and academic institutions and organizations from around the world. In addition to publishing the American Journal of Enology and Viticulture (AJEV) and the Catalyst: Discovery into Practice, the Society also hosts its National Conference, which will be a joint 71st ASEV National Conference and 45th ASEV Eastern Section Annual Meeting, scheduled for June 15-18, 2020, in Portland, Oregon. ASEV co-hosts the Unified Wine & Grape Symposium with the California Association for Winegrape Growers (CAWG), which will be held at Cal Expo on February 4-6, 2020. For more information, visit www.asev.org.