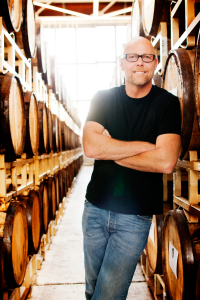 St. George Spirits’ Master Distiller Lance Winters, a James Beard Foundation finalist, dedicated himself to the art and craft of distillation. He will be presenting the keynote address at the 25th Unified Wine & Grape Symposium’s luncheon on Tuesday, January 29, 2019, at the Sheraton Grand Hotel in Sacramento.

“The distilled beverage sector is heavily steeped in tradition, even more than in our own industry, and sometimes breaking with tradition can lead to successes,” said Tom Collins, Unified Wine & Grape Program Development Committee chair.  “Lance’s dedication to quality sourcing and the distillation process, as well as his focus on understanding how aromas and flavors affect the products they produce, have won St. George numerous accolades. Lance has shown that he’s not afraid to make a better version of whatever they’re working on. Those attending the luncheon will hear about his unique perspective on distillation and the creativity he’s known for.”

Lance worked as a nuclear engineer in the U.S. Navy and a brewer for five years before he realized that brewing beer was halfway to distilling whiskey. Armed with a bottle of homemade whiskey as his resume, Lance approached St. George Spirits in 1996 and has been with the distillery ever since. He has been the creative force behind St. George’s expanding portfolio and instrumental to its growth from a dedicated eau de vie distillery into one of the most prolific and innovative craft distilleries in the nation. Under Lance, St. George has launched many of the iconic spirits that the distillery is best known for today: St. George Single Malt Whiskey, St. George Absinthe Verte, St. George California Agricole Rum, the St. George gins (Botanivore Gin, Terroir Gin and Dry Rye Gin), the St. George vodkas (All Purpose Vodka, California Citrus Vodka and Green Chile Vodka), Baller Single Malt Whiskey and Bruto Americano. His work has been recognized by the James Beard Foundation as a finalist in 2018, and semifinalist in 2016 and 2017, for the category of Outstanding Wine, Beer or Spirits Professional.

Register today for the luncheon before seats are sold out. Separate registration fee required.

Approved by the ASEV Board of Directors on January 23, 2017.

The objectives of the Society shall be to encourage, stimulate, and support research in enology and viticulture or other sciences directly applied to enology or viticulture through its technical programs. Furthermore, the objectives shall be to provide forums for the presentation, discussion, and publication of such research and technological developments for the advancement of science and the promotion of education in enology and viticulture.