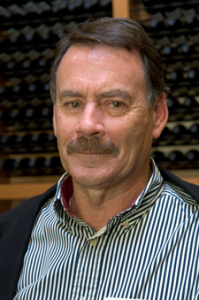 The ASEV Merit Award is presented annually to an individual who has significantly contributed in an outstanding manner to the progress and advancement of enology and viticulture or to the Society itself. This award acknowledges excellence in the fields of education, technology, research, management, public relations or any discipline related to enology and viticulture.

Discovery and Innovation and the Role of Research Funding

Roger Boulton came to the University of California, Davis from the University of Melbourne, Australia, in 1976, at the age of 27. He took on the responsibility for the Wine Stability and the Distilled Beverage Technology courses, formerly taught by Professors Harold Berg and Jim Guymon. He developed a new course in Winery Equipment and eventually the course in Winery Design. In 1982 he established the first Teaching Winery in the US that had small commercial-sized stainless steel fermentors and related equipment. These would become the first on-line wine fermentors that followed fermentation progress and had automated pump-overs in 2001.

His significant research contributions include: first cross-flow filtration of juice and wine, first continuous juice flotation system (1976), first kinetic model for wine fermentations (1978) and its extension for the evaporative loss of ethanol (1983), first fouling models for membrane filters (1982), mechanism for potassium exchange in grapevines that led to the complete understanding of pH and titratable acidity (1980), development of stability tests for tartrate, protein and colloid in wine (1979, 1982), initial studies of the HPLC method most widely used for sugars and acids in wine (1979), a method for free sulfur dioxide using capillary electrophoresis (1996), a computer simulation of winery operations (1988), fluidized-bed crystallizer for tartrate stability (1995) and the first regenerable particle column for heat stability (1990), quantification of red wine color and copigmentation (1996), and a UV-visible spectral model for anthocyanins, tannin and non-tannin phenols (2006).

During the past decade he has been involved in the design and development activities for the LEED Platinum Winery at UC Davis, and instrumental in the establishment of the world’s first self-sustainable winery, both funded entirely by private support. He has taught more than 2000 students during his career and as many again in University Extension short courses and abroad, in particular the Chemical Engineering of Winemaking at the University of Sydney. With three colleagues, Vernon Singleton, Linda Bisson and Ralph Kunkee, he authored the Principles and Practices of Winemaking, now the most widely-cited text book in winemaking, which was awarded the OIV Prix en Oenology in 1998. He was selected for the Society’s annual (AJEV) Best Paper Award on four occasions, including both the viticulture and enology awards in 1980. He was inducted into the Jurade de Saint Emilion (France) in 1999 and awarded the Stephen Sinclair Scott Professorship in Enology in 2000 which he continues to hold. In 2000, Wines and Vines Magazine named him among the 50 Most Influential People in the US Wine Industry. He presented the Society’s Honorary Research Lecture in 2003 and the James F. Guymon Lecture in 2007. He has coauthored more than 100 presentations at ASEV national meetings, served on its Board of Directors, developed the first ASEV workshop (on HPLC in 1980) and proposed the first ASEV Poster Session in 1981. His contributions to the College of Agricultural and Environmental Sciences, at UC Davis, were recognized with the 2010 Faculty Award of Distinction.